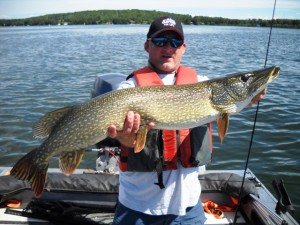 Please Phone Fish and Wildlife for updated information at: (780) 361-1250 or visit their website here.

During part of the 1920’s fresh (unfrozen) fish from Pigeon Lake were shipped to special markets in New York and Chicago for a premium price. From December 15 to March 15 each year about 400 licenses would be issued to fishermen. The fish were packed in chipped ice in boxes. Each box contained 200 lbs (approximately 90kg) of fish. The boxes of fish were hauled in sleighs to Millet, and from there sent by train to their destinations.

In the history book “Tales and Trails of Millet it tells that in order to have this happen the teamsters with their horse drawn sleighs had to be at Ouimette’s fish plant at Mulhurst by 6 a.m. This meant that any outfits from Millet area had to leave home about midnight.

When they arrived their horses were blanketed and fed. Meanwhile forty-two of the boxes of fresh fish were loaded on a flat deck on each sleigh. In an hour the loaded sleighs were on the return trip to Millet. If the weather was extremely cold the loads were covered with tarpaulins and lighted lanterns were placed underneath them to prevent the fish from freezing.

At noon there would be a short stop somewhere to enable the horses to have a feed of oats and a drink of water. By mid-afternoon they would reach Henry Moonen’s farm located where his daughter, Ruth Stensby, now lives (2.5 miles west of Hwy. 2 on Hwy. 616). Here the horses were exchanged for fresh horses that were able to make a fast trip to Millet where a railroad car was waiting. By seven o’clock in the evening the boxes of fish had been loaded on the train and the fish was on their way toe the U.S.A. The teamster and their horses returned home and waited for the next call.

The majority of fish caught at Pigeon Lake in these times, however, were sold as frozen fish and packed at Benny Ouimette’s fish packing plant. By the end of the 1920’s the roads were much improved and trucks were used to haul the fish. Charlie Moonen and Shorty Burns were two of the many people who would often do this. They would load the frozen fish on Mr. Moonen’s truck and sell them to local residents and to people in areas where fish were not accessible.

Later on as the supply of fish at Pigeon Lake became depleted, commercial licenses were no longer issued.